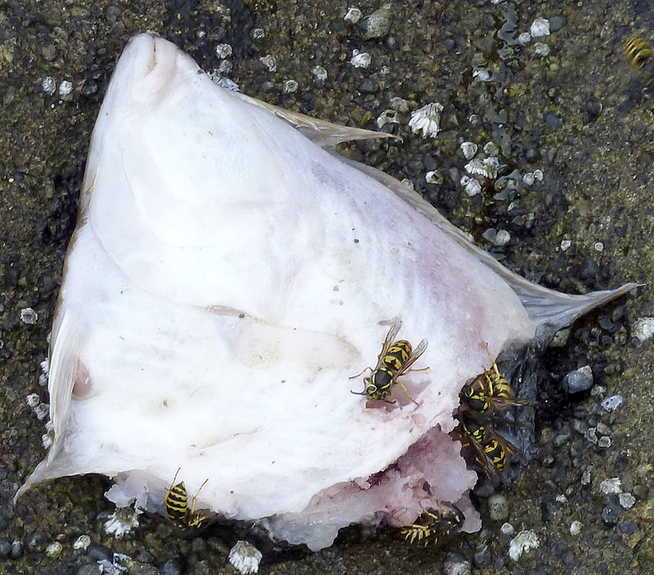 Julie L: COASST walk from Fishery to Hammond: About 50 swallows at Hammond (buff colored bellies), 1 kingfisher, 1 GBHeron, 3 eagles. The image is of a flatfish head left by the otters, being scavenged by yellowjackets (vespula squamosa).

Glen R 16:00: Today, for about 15 minutes I watched an apparent queen Yellow Jacket digging out a hole in the front door to my cabin. Every minute or so it would fly up and scout up around the door facing. And it had company. There was this small Hover Fly, about half the size of a House Fly, that was very interested in this Yellow Jacket Queen. It hovered about 8 inches behind this Wasp as it hunted about the door facing. It followed the Yellow Jacket everywhere, even following it as it left the door and flew out in the yard. Sometimes it would land on the door near the Wasp. The Wasp would fly up and come near it and it would quickly turn around to face the Wasp and the Wasp would back off. Then the game of ‘Follow the Leader’ would continue. Well, finally opened the door to get my camera for a picture. When I came back out, both the Wasp and Hover fly were gone. So I just went out to go collect some Lettuce seed.
That reminds me of another incident last week. I had been trying for about 15 minutes to get a picture of a Skipper Butterfly, so I could identify it. Finally, I had a good zoom picture all set to click on the Butterfly about 18 inches away. Right then the Butterfly flew up and landed on my finger that was going to press the shutter button. What could I do? Me and the Butterfly looked at each other for about 15 seconds. When I went to transfer the camera to my other hand to take a free-form pic, the Butterfly took off.
Speaking of Yellow-Jackets, this late summer I have seen 100 times as many Yellow Jackets as I have in the last 6 years combined. Fred A. concurs this is a bad year, mentioning that Lonnie G. ran into about 20 nests when recently opening up a new road on the edge of his meadow. Elaine C. said today that this is the worst Yellow-jacket summer she has seen since she began coming in 1962. Janet Ro. also says this is the worst she’s ever seen them, especially for this time of year. Elaine also says they are not as aggressive. But they keep coming after me. In the last few years I’d forgotten the reason I began the habit of wearing long pants instead of shorts. I've got stung or bit too many times by them. Now I remember, and at least one biologist supports my apprehension. In a 600 page book called "The Sociobiology of Wasps", where about a third of the 30 authors used 50% words that I couldn’t understand, the author of a Yellow Jacket chapter says that they are the only Wasps in the world that actually attack people to eat on them.
Lately, I have been asking people what they think are predators on Yellow Jackets. Surprisingly, one recurrent answer is Bald-Faced Hornets. Fred A. reports that he sees Bald Faced Hornets fly inside his house and pin Yellow Jackets up against the window, kill them and carve off their legs before flying off with the carcass. Both Russell Barsh and Barry M. say that Bald faced Hornets also predate on them. Barry M. says Dragonflies go after them. I have watched 10 or more hours of Dragonfly swarms above and Yellow Jackets buzzing on the ground or through the air and have yet to see a Dragonfly attack a Yellow Jacket. In Web research, predators mentioned are Skunks, Racoons, Hornets.
Maybe we shouldn’t be so quick to kill off Bald-Faced Hornets nest. Although they have a reputation of having about the worst sting around of the Hymenoptera, I have never been stung by one. And there has been at least a half a dozen times when I have unknowingly been fooling around within a few feet of a football-sized nest of Bald Faced Hornets and they didn’t attack me. Course, I didn’t stick around once I discovered my incursion. Bald Faced Hornets sure do like to hang their nests about 4 feet off the ground on fruit trees.

Glen R:  07:00 at home of Janet and John Ro. 100% sunny, temps mid 50s. At 3 miles out, in the tide rip, from his North Bay Beach house, John saw about 20 Marbled Murrelets. Most he has ever seen in Washington State at one time. The sun was just right to see the white lines on the wings when they reared up to flap their wings. He had his bird ID book handy and studied them with his powerful Spotting Scope. Janet Ro. says she misses the Bonaparte Gulls which she says should be here by now. Hasn’t seen a single one this year. They always used to show up by late August timed for the late summer Termite Hatch. Glen says that back in the late 90s, right before Labor Day Weekends, he used to see a flock of about 50 Bonaparte Gulls hunting Termites out of the air in the little cove west of Pt Hamm.. Hasn’t seen that in years.

Glen R:  15:00, North Bay. Just heard a Great Blue Heron squawk, Residents along this beach near Tibbs turnoff report that there is a pair of Great Blue Herons that hang out here all summer. I have seen them a lot these last couple months while working on the Ro. deck here N Bay beachfront. They often perch in the conifer at the beach front to west of the house. This particular tree is used a lot both by Herons, the Crows, various Birds of Prey, and Robins earlier in the summer. Robins almost totally gone from the Island at the moment, perhaps lowest numbers of year. At 15:30 Janet and John Ro. got Barry M. and GR to come look at a Sharp-Shinned Hawk that was chasing a Northwestern Crow around the same tree. Sometimes the Crow went after the Sharp-shinned. A second Crow came over to also sit in the treetop. When the birds flew up into the sky, they each vied for higher altitude position. This went on for about 20 minutes, until finally the Sharp-Shinned left to the North.

Glen R: 13:00, at home of John Ro.: In North Bay backyard went up to put up his clothesline and a Great Horned Owl took up from about 15 feet away and flew up 30 feet to a nearby conifer at the meadow edge. It was still sitting there at 18:30 when John Ro. pointed it out to GR. At 18:45 John Ro. called GR inside to look at 10 Marbled Murrelets out in a tide rip about 2 miles out. Some in Summer Plumage, some in Winter. Janet Ro. advised with various bird ID books. Also saw a Red-Necked Grebe about 1 mile out.

Glen R: 8 a.m., John Ro: North Bay 2 miles out, in closer than last few days saw 10 Marbled Murrelets. John had a band of about 5 Chestnut Backed Chickadees and a band of 5 White-Crowned Sparrows in his bird waterer and gutter water.

Glen R: 18:00: Warmest part of the summer is the last couple weeks. In 80s every day. Last few days more termites than any other time of year. Down at Cowlitz Bay seeing more Lions Manes Jellies than earlier. Still only 10% of numbers last year (Observation by John Rem.) Glen concurs that much less than past years. David L. Today says that the whole Presidents Channel is full of 3+- inch fish, very unusual. (Glen thinks of similar David report on the hottest days of 2010, in early July, when David saw the top surface of the water filled with small fish on the surface all across the Channel, presumably Salmonids possibly forage fish). Heard and saw a pair of Marbled Murrelets right in front of the Post Office, about 30 m offshore. Sunny, Clear, wind 0 -3 mph, variable.

Glen R: 18:00, Andy L: reports that the adult Pinks 2 weekends ago were so thick off of Stuart Island that you could have walked across them. Lately Caroline, he and Grace have been catching 4 to 6 pound Pinks near shore off of Sandy Point. DeeD. D., fishing with Mike, saw a lot of Pinks jumping off Sandy Point this afternoon. Andy also reports that the Pinks have been swarming around the San Juans the last couple weeks. No rain for several weeks, and heat in 80s most days until a couple days ago. Andy says that Pinks are jumping all the way at least from the county dock to Sandy Point. Laurie G. saw a 30 inch+- Salmon a few feet from shore last week off of North beach. 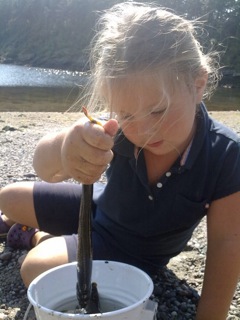 Sally G:  4:15 p.m. Lonnie and I are sitting by the woodshed surrounded by the wood he had split that afternoon, talking when a male Wilson's warbler comes out of a forest of thimbleberry behind us and adds a flash of color while checking us out.Julie L: COASST walk from Fishery to Hammond: 6" Lion's Mane Jellies in the wrack, but I don't think they're as many as last year. About 50 crows at Hammond, 5 gulls, 1 kingfisher, 1 or 2 otters working the tide rip, no GBHeron, no eagles, no swallows. Beach Seine at 4 in the afternoon, click on this page. 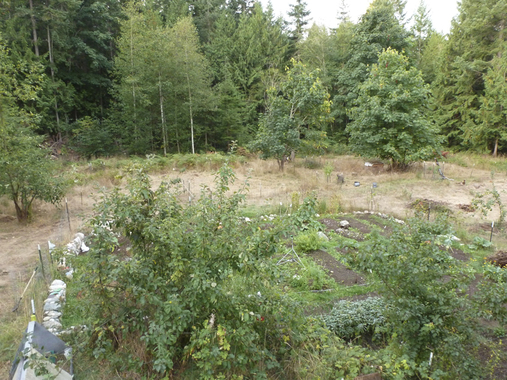 Julie L: This has been a bad yelllowjacket year, but the first few showers of late summer seem to have calmed them down a bit. One theory is that they've been frantic for water, and now they have it. In our vegetable garden, the tomatoes never set, but the zucchinis finally began producing this month. It has been a fantastic potato year, and the carrots and onions weren't so bad either. Some of our apple trees are taking the year off, but the Kings, Gravensteins, and Sweet 16s are heavy with fruit. In bloom right now: calendula, sunflower, lupine, hollyhock, johnny jump-up, feverfew, saffron crocus. In the photo of my garden, you can see how dry the grass is, and that the maples are just starting to yellow up at the top.


Sally G:  noonish. A couple of small swarms of flies? ants? termites?-- about 1/4 inch in length-- rising out of the ground by the garden. The sun through their wings looks like dandelion fluff in the air.

Glen R: walked down to take down the Martin houses at lower TNC. I saw 2 non breeding Yellow Billed Loons, (unusual to see Yellow bills any time) and at the upper pond 4 Wood Ducks and 12 Ring necked Ducks. First of both for me, although Tony S says they are breeding their some lately.