early May: Camilla L saw a sea lion. Babs R saw an osprey. Rob B saw a Golden Eagle at his pond.


Glen R: There were up to 250 Surf Scoters in Cowlittz bay for about a week or so, mostly a few hundred meters out from TNC property. Surf Scoters are highly linked with feeding on Herring spawn to build up body fat before their long migration and nesting up north. Herring spawning usually only happens on each spawning strata for about 3-5 days and then later herring move along to the next spot. The only known herring populations in the Salish sea that spawn after April 15 are a very small population at Nanaimo and another very small one near Vancouver. Then of course, the Cherry Point one. 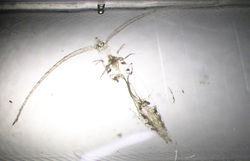 At the plankton counts, they have been calling this thing a "monsterpod." It came from North Bay. Photo by Glen R. 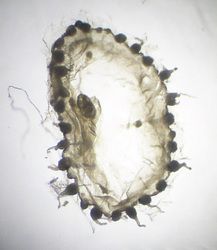 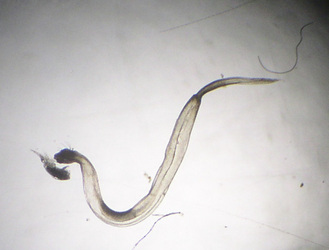 Glen R:  Have been seeing and hearing Great Horned Owls days and nights around MB cabin last couple months. Today about 40 yds SW of cabin, for 1 hour watched 3 young , fluffly young in Maple tree. One adult to SE calling, one adult to NE calling occasionally. Adult to SE above backyard garden in crotch of tree. Have seen adult in backyard frequently and remnants of 2 rabbits this winter. The other morn at 8 am, a woodpecker was working in dead limb Maple tree a dozen yards or less from the owl and didnt seem to notice the owl. But often the robins are scolding owls in the woods around here. Rufous Hummingbird activity picking up lately on porch feeder.

Julie L: COASST walk to Hammond, 13:00, cloudy with occasional sun and drops of rain, minus tide. Eelgrass from Fishery Pt. to the clay banks and beyond, lots of wakame shorewards from eelgrass from clay bank to Hammond and around the corner to Little Hammond, some sargassum. Lots of 1 - 2” fish in big schools in the shallows, stretching from Fishery Point all the way around to Little Hammond. 3” jumpers a little further out. At Hammond: a kingfisher, a bald eagle, some swallows, a very few gulls and crows, a river otter and a seal. Didn’t see the usual GB heron or the two oystercatchers.

Glen R:  saw Wilsons Warbler in the backyard MB. Saw a family of about 6 Winter Wrens by brushpile in woods come down to parents begging for food.

Glen R: a young Red-breasted Nuthatch landed on my head and began calling for about 15 seconds. 3 of these young bathe and drink in bird waterer lately.

Glen R:  A band of about 6 Wilson's Warblers in backyard MB lately. Hitting Salmonberry before they are ripe. A Swainsons Thrush died flying into window. Later saw one at backyard water bath. Since 5-24-10 quite a varied assormtent of Black-headed Grosbeaks at feeder lately, apparently both female and young, rarely with adult male.