17:00, Severson Bay: Two crows, 1 cormorant on buoy. Small fish at the surface all along the length of the plankton tow area between our boat and the beach.

Chris W, on the way home from the PO, found a Rough-skinned Newt, Taricha granulosa granulosa. It was a darkish muddy red, overall 4” or so, half being a slender, tapering tail. Its eyes protruded and it had a tiny horizontal stripe of yellow on each lid, upper and lower. Its feet had 5 digits. The underside was brilliant orange.

Ryan D and Wikipedia say that this little sweetie has teradotoxin in its skin. Handling or, especially, eating it, can paralyze or kill you. In fact, thirty people, on a bad day, could die from the teradotoxin from one Rough-skinned Newt. Garter snakes are the only known creature that is resistant to this neurotoxin. Luckily, Chris used a maple leaf to move it to one side of the road, and, one month later, is still alive.

Julie L: Woolybear caterpillars are out.  Great Horned Owls hooting in the woods in the evening and morning. Ear splitting shrieks from Barred Owls in the middle of the night. On a noon walk from Fishery to Hammond, lots of beached Lion’s Mane jellies, from 4” to 18” in diameter. At Hammond, a large pile of wrack, including jellies, kelp, ulva, fucus, eelgrass, iridea, wood chips, and sargassum. Also saw the largest flock of crows on the beach that I’ve seen this year, about 50 of them. Only two gulls, both immature, and two Great Blue Herons. Also, a fish head with adorable brown eyes and a 5” mouth at C**k’s first point, presumably related to the many otter tracks there.

13:30 North Beach: 1 Heerman’s Gull. Three large crab boats tending pots between Stuart and us and on the north side.

Larry W wrote David L:  As I approached land Saturday about 9:30 AM, I saw several current-like streaks on the water's surface. But these had more of a linear appearance although there wasn't any associated outward wave action. When I viewed one of these against the sun, I saw a very strange, polarizing effect. They were less than 500 yards offshore, about 10 yards wide, and I began to suspect they were associated with fish! I've never seen anything like this before... Any thoughts?

A couple of things happen at this time of year. I don't know the science, just the sort of subjective observation and puzzling you'd expect from a marine operator...

One cool thing is that the first winds after Summer wash up an enormous amount of algaes, which lie on the beach and decompose, and then get digested. Then, about November, the higher tides of the approaching solstice floats all that edible flotsam, including the sand fleas still busily chomping. This is a large nutrient input I suspect, and highly concentrated into the "trash lines" related to what you saw.

However, these generally don't exhibit polarity in my experience. That suggests oil-- "natural" oil as you suggest.

Another thing that happens in curving surface lines right now-- which I just confirmed to personal satisfaction-- is krill concentrations. If you see gulls dropping and pecking in a stuttered fashion along these lines, look in the water. You  might see little shrimp like critters-- krill-- feeding perhaps on the same nutrient laden water referred to above. "Yeah, but where's the oil?" you may ask. Krill are stuffed with it... think about the effort required to continually lift off from the water to peck at these tiny bugs and you start to realize how rich in oils krill must be be to justify such an energy expenditure.

Still, not a lot of oil on the water in my experience, so...

About now, throughout these waters, we are loaded with juvenile fish. People in the San Juans have gotten lax perhaps and think of only a few species as forage fish, but forage fish are -- you guessed it-- fish that are foraged, including many which are ignored. Think for instance of the river otters' appetite for gunnels, chomping them for hours at a time in the summer. Right now at Cowlitz dock there is a dramatic swarm of young and old shiner perch. I'm hoping that these clear out because before them, and in many bays and inlets through our part of the County, there have been juvenile herring... very oily.

I'm sure you have been seeing several seasonal peculiarities. One is the "cat's paws" or "boils" that sometimes get scared by the boat and hit the surface for a moment, especially very early and very late in the day. Right now a common sight is a few gulls hovering over a juvenile seal who, in playing with these small fish as yet unknown to me, cause them to concentrate and hit the surface... to the advantage of the birds. It's symbiotic I suppose if you count the mammalian curiosity and "playfullness" of a young seal-- I suspect this behavior is gratifying for the seals and gratification is the same neural reward whether you are talking belly or brain.

All of this suggests there are more serious populations which we, with our air bias, seldom see. Occasionally, for instance, I'll see what looks like a 12" herring in the air, pursued by something no doubt. Sometimes I see single small squid-- at the Deer Harbor dock, of all places. The last appeared to be stalking juvenile herring, and definitely thought I was not legitimate game. The point here is that undoubtedly there are massive feedings on oily sources under our feet as we cross the channel, and when we find oily residue and a fishy smell on the surface at this time of year, I suspect the source is-- as you appeared to guess-- quite natural and a very good thing.

Of course sea mammal shit, like porpoise and seals, is also probably somewhat oily and fishy smelling but I don't want to think about that. Hah! And then there's potential spawning residue. Oh boy... I'm never going swimming again.

Julie L: Went mushrooming with Madrona M while Russel Barsh taught the plankton counters to identify stomach contents of juvenile salmon. This was a really good year for lobster mushrooms, which are actually two fungi. A mushroom, around here it’s usually a shrimp russula, is colonized by a fungus that turns it orange and tasty. As always, don’t go eating a lot of mushrooms until you’re sure you’re not allergic - a different matter than what happens when you eat poisonous mushrooms but still icky. The image shows bleeding lactarius, woodland agaricus, chanterelle, matsutake, rosy gomphidius, shrimp russula. 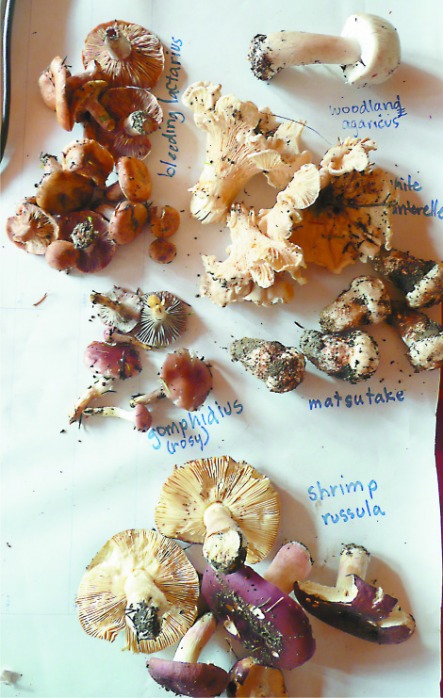