Glen R, 16:30 to 19:30: Round trip walk to PT Hammond. Sunny, 75% of sky. Air temp lower 60s Fh. Wind variable 5 to 10 mph switching from out of N to out of South. Low tide=3.6 at 16:36. High tide= 9.0@ 23:41. Water murky as far as can see from shore, from yesterday afternoon winds up to 30 mph. Saw 1 Kingfisher repeatedly hovering off Little Hammond Point, but not diving. At Pt Hammond saw a pair of Black Oystercatchers cruise by, not landing. Saw 1 Great Blue Heron pass from North to South from Pt Hamm over Little Hamm. (ON June 29th in Oyster field Bay east of East Sound on Orcas saw 13 Great Blue Herons feeding in shallows, all within 150 m of each other).

At 17:00, in 120 degree binocular sweep to 2 miles distance, at Little Hammond, saw 3 Gulls, 3 Cormorants 3 Pigeon Guillemots. From Pt Hammond binocularing Bare Rock could see 16 Cormorants and 20 Gulls, 2 unidentified birds. Off Pt Hammond Annex watched a pair of Rhino Auklets fish for 45 min, neither ever had a fish in their bills. Saw an Adult Bald Eagle returning from Bare Rock with a grocery- sack sized clump of dried brow grass in its talons and after a pas boomeranged back and landed in Conifers maybe 15 m inland from edge of highest part of East facing bluffs between Pt Hamm and Little Hamm. Saw 1 Harbor Seal off of Pt Hamm.

On the whole trip the only fish I saw were a couple small fish swirls off Glacial Composite Rock and did see a school of (approx 1,000) 80 to 100 mm long fish within 2 to 15 feet offshore of rocky cliffs at Pt Hamm. Not Sand Lance or Herring. Water ripply, very occasional surfacing, 80% guess was Surf Smelt. Rarely shiny like Herring, and thick schooling behavior. Have heard that big schools of Sand Lance in Eastern part of San Juans, and that is where the people are catching Chinook, with 30% of fishermen getting fish. Full of Sand Lance. Talked 15 minutes with boat fisher returning from fishing all day from Fishery to Mail Bay Rocks. Said saw 1 Chinook caught at Fishery. saw some unidentified baitfish (on fish finder) and Sea Birds and Seals at Fishery, everywhere else dead to Fishing indicators.


Babs R:  22:00 (notes by GR): Severson Bay Porch. Huge Moth about 4" X 5". Glenda S. says she saw a huge moth like this at her place some ?weeks ago. Glen R did some web research and apparently there are 2 huge moths reported in Western Washington, and at least one is a Ceanothus Moth.

Glen R 19:45, fishing for Salmon off Severson Bay shore. Had one probable 3 pound Coho (2 big jumps) on for a few minutes. No signs of surfacing big fish in 1 and ½ hour fishing. A very few signs of small jumpers. No Seabirds, no Otters, no Seals.


Gretchen W: (notes by Glen R) : Mail Bay seaside porch. Gretchen says she’s been seeing a single African Ringed -necked Pigeon at her feeder lately. Barry M and GR looked it up in Peterson Western US Field Guide to Birds (1990 edition). Upon seeing the pic of a Ringed Turtle Dove Barry M says that he has been seeing that bird at the Pt Hammond farm for the last month. Apparently the Ringed Turtle Dove was a Pigeon domesticated from the African Turtle Dove, an introduced bird to the USA that was beginning to appear in Los Angeles urban areas and rare elsewhere ©.1990) . Gretchen says that the have about 20 Band-Tailed Pigeons that show up at their feeders morn and eve, for the Sunflower Seeds. At first a few are around, and they wait until about 10 are present until they all descend on the feeder at once. Gretchen says she’s never seen so many Crossbills as this year, and also lots of every kind of Red-colored Finch. Gretchen is concerned, that unlike all the other years that they have been here since mid-1990s that she hasn’t seen a single Bat at their place this year. Barry M says he’s still seeing Bats at Upper County Dock field. 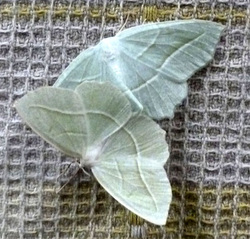 Julie: These moths were mating on a damp dishtowel on the laundry line under the alders (which are a food source for the caterpillars). They are campaea perlata, or Pale beauties, as identified here: http://www.butterfliesandmoths.org/sighting_details/545697. They are found all over the continent.

Barry M, 10:00 am, saw a single Cedar Waxwing in Fig tree in field up from country dock. Barry says that Tony S. has been hearing Cedar Waxwings every time he walks down lower Conservancy trail.

Glen R, 13:00: North Bay field. Saw 2 Lorquins Admirals. One on a blade of grass, the other above it touching its wing. Not mating. Also saw a Lorquins Admiral fly across Mail Bay road. 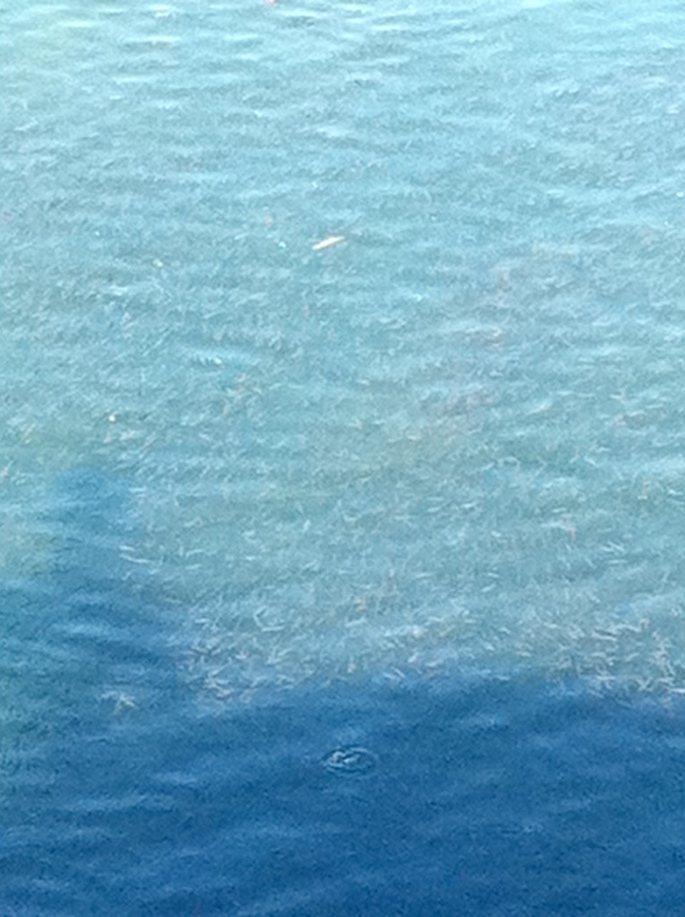 Don H:  the fish (and photo) are of our little cove, due east of our cabin, north of mail bay, just south of the larger “otter” cove before the point to College beach.