Julie L: The wind is blowing too hard for the COASST walk to Hammond. Over the  next few days, I tried again but the tides were too high and the wind too strong.

Barry M: Red-breasted Sapsucker pair sighted. Someone else saw one too. This form has yellow bellies but  is not the Yellow-bellied Sapsucker of the Eastern US. 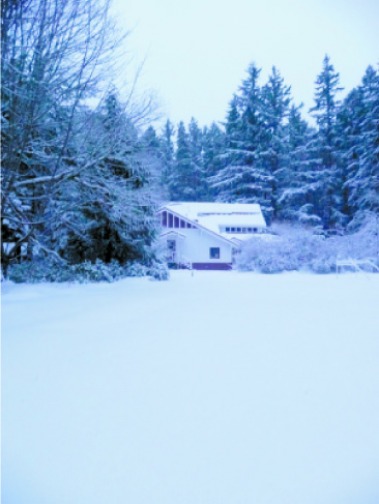 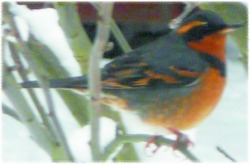 Julie L: It's warming up, though there is still snow on the trees and over a foot on the ground. In the morning, our apple tree had Varied Thrushes and some kind of small woodpecker (maybe Barry's sapsucker???? See photo below) pecking at the frozen apples. Lots of birds at the feeder from dawn to dusk. Java found a rat in the salal, the first one we've noticed around here in years. 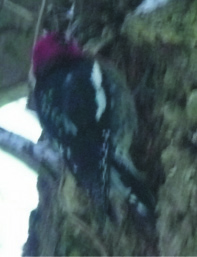 Julie L: Thawing. Sleet in the afternoon. Much activity at the bird feeder.

Barry M: 12:00 identified some of the birds at the Loyd feeder. There was a freezing rain at the time, but still about 8” of snow on the ground. If you are curious, you can search these names at the Cornell site.
Rufus-sided Towhee and Varied Thrush: these are the largest.
Fox Sparrow: Waldron has them year-round. We have the sooty form, darker than shown in some field guides. They are the most numerous bird at our feeder today.
Dark-eyed Junco: Slightly smaller than the Fox Sparrow, with white belly.
Golden-crowned Sparrow: Dark streaks, brown crown which turns golden around January.
Barry looked for, but didn’t find, Pine Siskins and finches.

Glen R: He has been getting a wren to eat grubs out of his hand. He keeps them in jars until the wren shows up.

Julie L: Got within 4 feet of several Ruby-crowned Kinglets on the thawing school hill around 16:00 today. 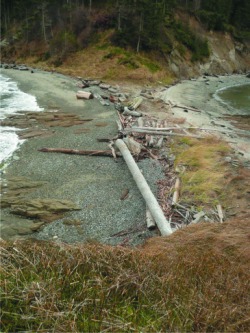