Glen R: 17:00-22:30 round trip walk from Farm Bay landing to Point Hammond. Wind < 3mph, later in evening much moreglassy. Light rain earlier day, thunderheads stacked over Cascades and North sky, Mt Baker clear visibility all trip. Otherwise PC. Temps approx 58-62 Fh. Lo tide 15:35=.8, Hi tide 22:40=11.5; One dozen gulls in surface knot 1 km away Presidents Channel. . Pigeon Guillemots the most counted at any one time today=11, especially around Little Hammond. Saw a pair of Marbled Murrelets most of eve at Little Hammond 50-200 meters from shore, going after baitfish (40-70 mm herring best guess). G B Heron began flying out from Seaweed Rendevous Corner towards Orcas, immature Bald Eagle coming towards it, Heron turned 90 degrees, flew off to South, eagle ignored. Saw occasional single eagle during eve, at 22:00 a pair flying together close to Point. About 3-5 Rough Winged Swallows working the air South of Little H.
Arrived Little H. At 17:30, watched till 18:00. 5 seals working 100m offshore, sometimes parrallel in herding formation line, 1 juvy, some large adults. Later in eve at least 7 Seals here and 5+ more at Big H. Saw Single Otter 6+ times cruising shoreline throughout eve. By 18:00 was noticing increasing amount of baitfish activity, sometimes 50 jumpers a minute in 100 m area . Later snagged two while fishing. Herring approx 40-60mm. As eve wore on, sometimes very dense schools of thousands, in a few meters diameter. Probably 10's of thousands in Otter Bay, 80% in South end. Scattered patches at Big H and on return in Farm Bay. Salmon activity showed up about 18:15. First saw 3-5 meter streaks through water in mid bay near Seals, baitfish scattering, Then baitfish scattering streaks gradually to 15 to 30 or more at any one time over 100 m area, too many scattered at any one time to be Seals.

At 18:30 saw first King body half out of water rushing at surface super fat, maybe 20 pounds. Over next 3 hours saw confirmed Kings likewise 5 to 7 times and much more underwater activity as they surface rocketed through baitfish. Between peak hours of 19:00-20:00 common to see this happen 6-10 times a minute within 100 meters. Walked to Big H @ 20:30 for 30 minutes, no sign of Salmon there. Returned to Little H where action still going. As eve progressed, Salmon closer to shore, 5% within Shorecasting range at 19:00 and 40% by 21:00. From about 20:30 to later, some Kings 2-3 m from shore going through thick herring schools. Although tried fishing relentlessly, no strikes. 2 boats working area also. I saw no fish on their gear in those hours either. By 21:15 the frequency of herrring school rushes decreased to about 1 every 3 minutes within casting range, but apparent excited behavior scattered in bay but not as dramatic.

Total estimated surface school of kings in south bay at any one time = 30-50. Probably a lot more action going on down meters below the surface which is out of vision. 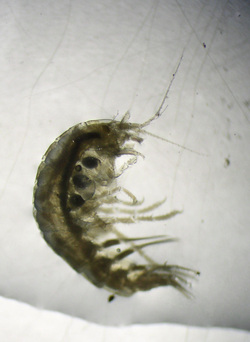 Glen R:  Farm Bay field. 10 about Have seen 2 American Goldfinch yesterday and 3 today down by unmowed grassy areas. Also saw 3 Goldfinch at Schoolhouse corner fields same situation unmowed. Walked roundtrip fam Bay to Pt Hammond. Wind < 10 mph.Hi tide 8.4 @22:40. . Wqind seemed to drive off the fish. Did see some concentrated baitfish shools closer to shore in the more sheltered areas of the cove. Only scattered fish in the more open water. At 9 pm did see a large salmon rush through baitfish at Little H and a few minutes later Andy L. Hooked about a 12 bound King about 5 meteres from shore. Andy L. Reported seeing 6- 8 schols of adult Coho in middle of Cowltz middle of sunny day with 0 mph wind. Feeding on crab zooea. Had it on for about half a minute and then lost. Did see one rhinocerous aulklet at Pt Hammond. Saw a single Heron at Huntley Point and then a single heron later at Little H. 0
Heard 2 young owls close to house last 3 nights. Still haven't caught that young rabbit around the garden. 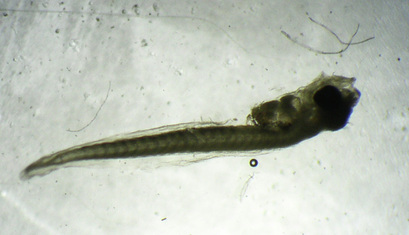 Glen R: To Severson from 7-9 pm. Hazy and overcst. Wind <6 mph. High tide 8.3 @ 23:10 Scattred baitfish, 3 guillemots. 25 gulls in a surface cluster far out. 1 marbled murrelet. In eddy line 1 pigeon guillemot. one otter. In front of cooks saw a dozen 3"-4" wide Sculpin skulls with meat on them floating on the tideline withing a 30 meter long streach of tideline. Oh, yeah danny f said that the clams have never come back on her beach sinche she bought it 20 years ago, and there is no harvesting at all. She has said that the sand on the beach has changed the shoreline a lot, some times a couple feet in one summer. 8pm sparrows (no binocs for better ID) hopping around the beach collecing beach hoppers.( Amphipods)

Glen R: 7 pm to 9pm roundtrip walked Farm bay Landing to Pt Hammond. Coludy Overcast, wind less than 8 mph. High tide 8.3 @ 23:30. Few scatttered bait, appear to be herrring , no concentrations. Saw 3 pigeion guillemots at the point. Also a Rhinocerous auklet with mouthul of long fish, looked like Sandlance. Could see 5 adult bald eagles working the gull colony out at Bare Rock.. About 25 Cormorants roosting on the rocks. Saw single heron at Little H. On way back at Litle H surpissed something under a big rock there. Heard a huge spash and smelled real musky. Otter. A little while later heard little splashing and looked and there was about a 10 inch long sculpin spashing in a puddle under the rock, about 20 feet from the tideline. Certainly was way  too small to make the big spash heard there minutes ago.

Rolf T. Commented on GR observation of seeing an extraordianry amount of Bigleaf Maple Seedlings this year in Mail Bay Woodlands. When Rolf T. looked around mid Island he realized that there was a extraordinarily huge amount of maple seedlings around his place too. He speculated that it might have had something to do with the extraordinary warm winter we just had. 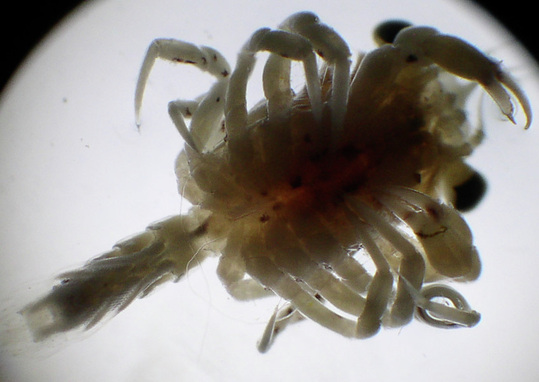 Julie: Susan A found a seal pup on her beach, possibly the same one Derek saw yesterday. Jessica found a dead or dying pup with its guts hanging out three days ago. Laurie G. saw a pup humping along the beach towards Sandy Point three days ago. 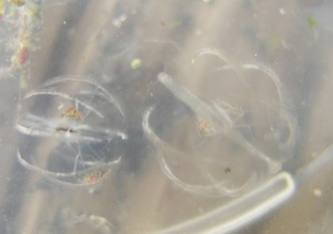 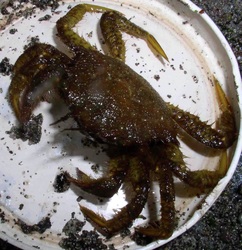 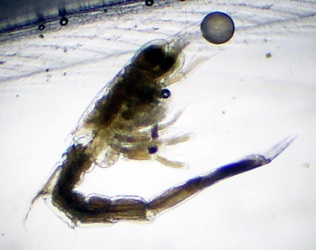 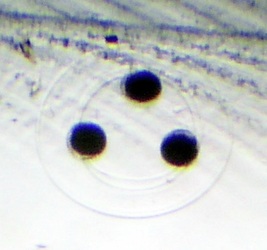 Below, clam and cladoceran plankton collected at Severson Bay. Photos by Glen R. 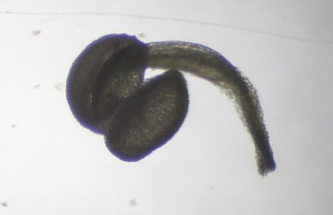 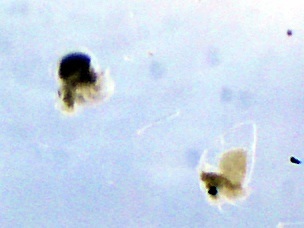