Five beach plankton tow. Below is a fish larva found at Severson Cove. 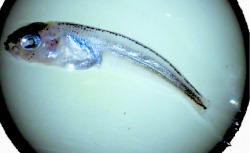 Julie: 8:00 the Pileated Woodpecker in our yard is very busy with the rotting apples.

Chris W: 17:50. Snowshowers and rain, windy. At dusk, walking down Beezie’s Lane, I could hear two sounds simultaneously: one was a rather high squeaky sound almost like part of a cat’s meow, and the other, a Great Horned Owl sound –(just as described on 12/30/07 by Glen R) – a repeated single note of the Horned Owl’s. Hurrying toward the house, I could see the silhouettes on the ground between the fireplace stonework on the West end of the house and the big Garry Oak tree.

A big owl flew up from the ground (clearly a Horned Owl by size though I couldn’t discern the horns) and away to the East over Ludwig’s field and trees, while the other form was still on the ground. As I got closer, it too flew, going West over the trees. Was this an amorous coupling?

Seen in L**g’s back driveway these last couple of weeks, a big Helvella mushroom (looks as though Julie’s photo is of the same type, the bottom-most picture from Severson’s Lane).

Also these last weeks, lots of Golden-crowned Kinglets feeding on the roadways, and in the woods. Next to Henry’s drive, one Ruby-crowned Kinglet was seen this week.

Jannick R says he’s been leaving rats out for the ravens. Unlike in other years, this year a raven has flown over but not stopped for a snack. Mike C says the same thing happens when he sets out chum for the ravens - no bites. Why not?

At Janice and Jannick’s pond, a single chorus frog was heard recently but there really is no interesting activity there. The red alder buds are red, but no sign of the leaves. 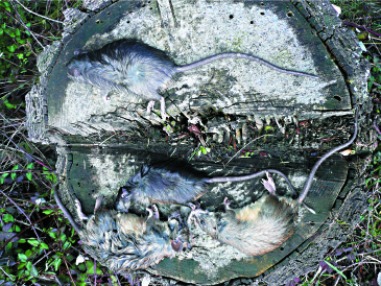 ulie L: Nuthatches singing from the direction of the A’s this morning. People have been saying that they don’t hear as many birds in the morning as in other years.

Julie L: Another brilliantly clear day. The crocuses are blooming, red-flowering currants, plums, and daffodils not.

Josie S: 13:40, TNC Cowlitz beach below martin house poles, Calm, overcast following a sunny morning, water clear as viewed from top of TNC bluffs. A few Mew and Glaucous-winged Gulls idled at water’s edge. I took a sample, just ‘cause, and came up with green-looking gammarids, for one thing.

Julie L: Several Great Horned Owls calling in the Burns’ woods. Light rain in the afternoon, the first in some days. Red-flowering currants, maples, and plums are budding. Crocuses are blooming.

David L: Birds are feeding in the shallows of the water. Smallish oil streaks, possibly indicating herring. Two or three weeks ago there was a scummy surface on the water. Kelp is drifting around outside of Cowlitz. Water clarity is about 10 feet.