Camilla L: A Great Horned Owl flew down to where our three drakes were sitting and grabbed a garter snake from in between them.
Glen R: saw first two Chestnut-backed Chickadees around (since last summer) the MB backyard the last couple days.

Glen R: Below are some images from the plankton counting session. Click on them and they should enlarge. The calanoid copepod and mysid shrimp on the bottom row are from the March 3 Severson Bay tow. 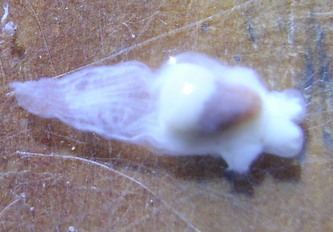 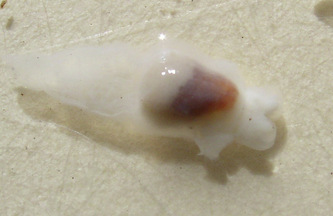 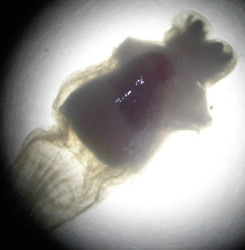 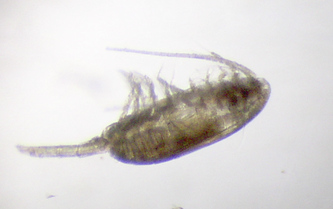 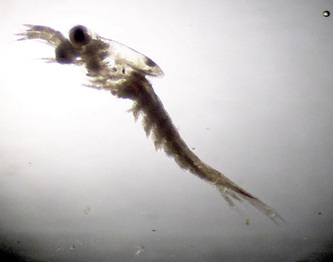 Saw 2 Kingfishers flying in tamdem by dock. No gulls around.

In single beach seine, a few thousand + juvy salmon. Approx 2/3 pinks from about 60-130 mm, 5 Coho to about 170 mm, some hundred+ Chinook 90-130 mm., and some dozens to hundreds of Chum, (hard to get not better numbers cause all identifiers could distinguish them from Pinks) Chum . Also one large Cabezon about 60 cm, about 20-30 Copper rockfish about 15-30 cm, a few Snakehead Prickleback, 2 Rock Crabs mating 3 others, approx 30 Striped Perch and 50 Shiner Perch, 5 Coonstripe Shrimp. 5 kelp greenling, both male and female, 25-35 cm. 2 Gunnels, 2 Herring . Also found a 1 inch x 1 inch cluster of pinkish-orange eggs that Russel B. identified as sun scorched Herring Eggs. A lot of the Salmon, at least several hundred,  had a blue disfiguring disease on their heads (could not identify in 12 hour of web research). Also Ann (assistant to R Barsh) identified quite a bit of Sea Lice problems on the fish, esp. Pinks. Few insects in the stomach contents, a lot of the stomach contents were small fish probably Sand Lance about 40-70 mm long, also a few apparent herring about 40 cm long. Furious activity 150 m S of dock of juvy salmon hitting surface, sometimes a few hundred a minute in area 100 m diameter.
.
All of the activity and small fish activity makes me wonder if there is a larval fish nursery happening near this site which is drawing all of this incredible fish activity in such a small area. Russell said about 6 or so Smelt too were in the net. Andy ( live up hill above PO with caroline) says a least 2 herons were roosting in woods behind house much of winter.

Glen R: got photos of Western Tanager in maple overhead backyard Mail Bay. Also got photo of Orange Crowned Warbler looking in brush backyard, pic shows something white glob in beak, not sure if down feather or remnants of spittlebug housing.

Glen R:  hearing Varied Thrush outside today. Continuing having about 3-6 juncos at feeder regular. Also different young and adult towhees, a few Song Sparrows. Last week I saw a Song Sparrow with a twig in its mouth fly into bushes and with a young right after it begging fro food. A few of them and a few Bewicks Wren are also regular at feeder.

Camilla L: A Great Horned Owl has been sitting in the tree above our bathtub. Every morning, a Robin sits nearby and gives its alarm call.

Julie L: In bloom around our house: Jasmine, yellow flag iris, Oriental poppy, red and yellow roses, Johnny jump-up. Other flowers: Scotch broom, Orange Honeysuckle, salal, white clover, Herb Robert. The dogwoods have just dropped their blossoms. Red peonies are finished and pink peonies are just out. Rye is ripe, orchard grass and other pasture grasses are waist-high with heavy seedheads. Camilla picked a quart of wild strawberries at the airport, and the domestic ones are ripe too. Some salmonberries are ripe. I find one or two tent caterpillars beneath certain alders all over the island this last week. 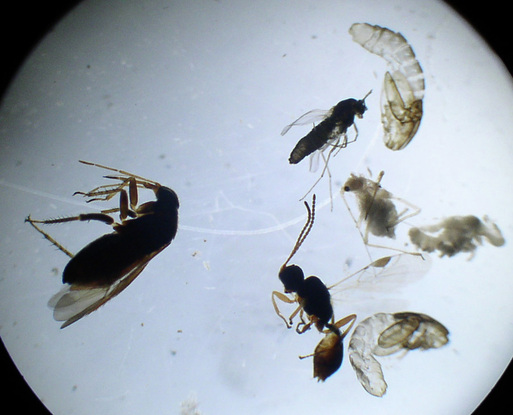 These insects were found in a plankton sample taken from Severson Bay.

Glen R: 7:15 pm Mail Bay woods upper south woodlands. Jim D. reported a possible Peregrine was spooked from above outbuildings area. I relayed the description to Barry M. who said that it sounded a lot like the habitat preference, (forest) size and description of a sharp-shinned.

Barry M: saw a medium sized bat today at Sawmill Corner environs. Said there are 2 sizes here. In 2008 saw a long-eared bat in a outbuilding. At Sawmill corner environs saw a Western Tanager hunting flying insects, possibly termites off and on over a 3 hour period. Then robins all showed up and began running around the yard.

Glen R: has been seeing a few carpenter ants around for the first time in about a month of rainy cool weater. Last 2 days here almost 70 degrees, first time in a few years

Glen R: Whatcom and Island County have been closing beaches due to red tide. In the Mail Bay woodlands, he's been hearing throught the night a single young Great Horned Owl most every night.

Glen R: Bill C. reports that he saw carpenter ants for the first time today. Barry said he hasn’t sen a big-winged adult explosion this year, only very scattered ants over the last month or so. In the field near Schoolhouse corner: saw a Sharp-Shinned being chased by 3 Violet Green Swallows. Barry M reports 1pm possibly 2 Purple Martins atop Cowlitz Bay dock crane.


Below: Fish egg and barnacle nauplius  from Cowlitz Dock. Photos by Glen R. 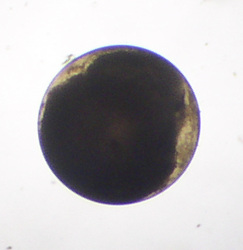 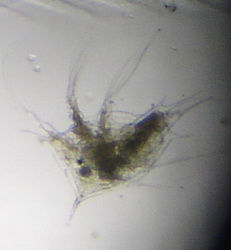 Julie L: Last week we saw a minke in Presidents Channel. Today we went to Friday Harbor and saw L pod, between Yellow and the mouth of the harbor, between 10:00 and 10:30. There was a harbor porpoise at Yellow, very unusual location. David said it might be because the porpoises were avoiding the whales.


Glen R:  At 11 am and then again at 5 pm heard 2 or more young Great Horned Owls in woods west of Schoolhouse corner. Also heard Red Tail overhead.  Was talking with Mike C today. He caught a few legal 26-36" Ling Cod this spring, either on the Cowlitz side of disney or at Mowatt reef. He also mentioned that he has been seeing a lot fewer Greenling the last few years. I echoed that sentiment as at Point Hammond there were about 1/5 as many Greenling I would catch than in 1996-7. Skip L reports seeing 2 adult bald eagles (white heads) on a nest above Francis' Cove, and the nest is visible from the dock. Also saw a 3rd adult bald eagle perched on a tree near the nest.

Glen R:  twice in the last 3 days I’ve seen a Pale Swallowtail (Papilio eurymedon) at blueberry patch near School corner. Also seen a pair of Western Tanagers there today mostly interested in the yellow (unripened) fruit of the domestic cherries there. Today also noticed that fairly regularly for about an hour one House Wren was chasing another in relentless circles around the nest snag from which young recently fledged. Diameter of brush at base of snag was 30 feet and the birds were circling around the perimeter of that. Saw a Sharp-Shinned Hawk a couple times today at Schoolhouse corner fields, Characteristic short shallow wingbeats and then a glide, maybe a circle and then repeat.

Julie L: Winged carpenter ant drones at our place for the first time this year.


Glen R:  Mail Bay Woods 22:30 -23:00 Hearing a big commotion of GH Owl adults 2-3 really excited and talking over each other and lots of different calls all at once. Sounded like an argument. Hardly any silences between calls. Approx 150 m. SW of turnoff corner to gravel pit. Then one owl came down close to house and made loud single notes. (Next day Fred A reported hearing same thing same time to NE of turnoff (east end) to Mountain Road).