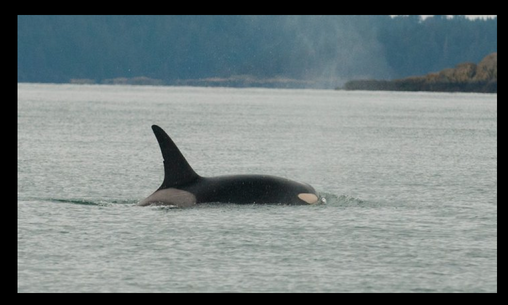 Patrick O: Saw Orcas off Disney. Somebody else saw them in Presidents Channel. The one in the photo is J28, a female named Polaris, born in 1993.

David L: Cowlitz Bay, 18:00. Gulls good and thick on outer line of moorings. Easily 1,000, not feeding frantically. Supposition: They wouldn't be there if they weren't there to feed.

Julie L: The chorus frogs have started to sing their deafening night songs from the pond across the street.

from Kwiaht on Facebook: We found a huge sea lemon (Peltodoris nobilis) laying eggs under the Channel Road bridge in Deer Harbor today.

Julie L: In garden: red-flowering currant, plums, cherry all blooming. Apples and pears not yet. Early daffodils blooming, yellow and blue crocuses, hellebore still around. Grass just starting to grow again. We saw a single yellow bloom on a Scotch broom near the quarry, and a single bumblebee in the woods behind our house. At Fishery Point in the afternoon on a rising tide, two gulls (mew?), 8 Red-breasted Mergansers, 2 Oystercatchers. At dusk at home, robins tweetling. 8:30 at night, Great-horned Owls calling from the north, Barred Owls from the south, and Chorus Frogs from the pond to the east.

Salmonberries (Rubus spectabilis) on the County Road have their first blossoms.

from Kwiaht on Facebook: In another sign of spring, the witlow grass (Draba verna) and wild cresses (Cardamine spp.) are starting to bloom. Both of these mustards are tiny with very tiny flowers, requiring a close look.

David Loyd: Two schools of herring-like fish: one among the moorings toward Sandy Point and one on the outside of the dock, moving east towards shallow moorings. Heavy rolling action on surface. Gulls anxious above them but not diving much. Hard to estimate their length - probably 5 - 6 inches. School sizes each about 20 x 30 feet. Jason Lerner reports similar activity several days ago.