David L: Herring spawned in Deer Harbor yesterday. Today, a flock of gulls wheeled and dove over Cowlitz. Probably our herring are also doing something sexy.

Julie L: Walked along Severson Cove to Hammond in the late afternoon. Saw a dead octopus with all its legs bitten off in the shallows, and saw a damp looking Bald Eagle sitting on the remains of a gull at the Point. Possibly this is one reason that there have been fewer gulls here lately. 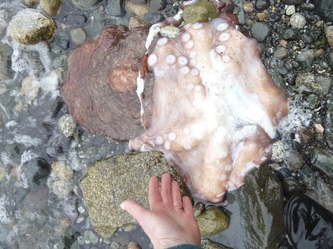 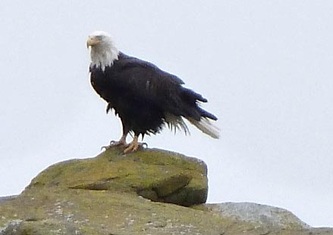 First hummingbirds in our red-flowering currants. We're a little later than our neighbors, I think.

First dandelion heads in the yard. Again, our neighbors reported them a few days ago. One of the ducks is setting on a clutch of about a dozen eggs.

David L at Cowlitz Dock 11:00: We have a large aggregation of mature tubesnouts against the dock. Current from East, large ebb underway. Doug, on the Caleb Haley, reports that the same phenomenon has been occuring regularly over the last days.
The current pushes against the float steadily and strongly from the east. Surface scum gets collected. Some megazooplankton feed primarily on some kind of apparent larval fish (very wiggly swim pattern). These seek the stable water damned against the float. on their way there, among the pilings, tubesnouts and apparent surf smelt (maybe 3 - 4”) mix and feed on the surface.
Sure sign - a few gulls come in and feed on surface. Tough to call the proportion, but more tubesnouts by a factor of 2 or 3. No apparent signs of activity more than 50’ from the dock (surface ripple). Caleb Haley tied here? Hypothesis: Do the dock and large vessels create structure for this activity?
11:20 the activity extends from 100 yards SE of the dock/200 yards towards Sandy Point. Also over clean cobbles approximately 4 feet of water (2/3 fathoms), there are apparent salmon smolt. Russel Barsh guesses they are spring chum.

Linnea B: Saw juvenile fish in the shallows at Cowlitz Bay.

Found a smashed robin's egg on the road at Mail Bay.