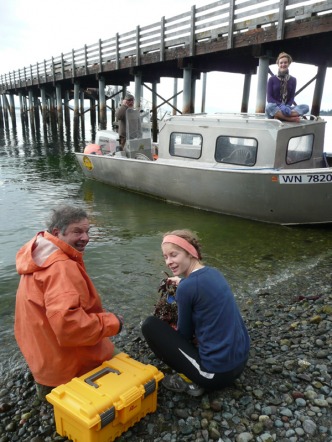 The 2010 beach seining season has begun! As usual, we are all looking for something different. Dr. Russel Barsh of KWIAHT, who is the scientist overseeing our efforts and who has helped us immeasurably with training, funding, and other support, wants to know what conditions invite juvenile salmon to visit our waters. When are the major prey items around, and do the salmon take advantage of that? His permit allows him to capture almost 500 chinook salmon, and requires him to be careful enough to damage fewer than 1% of them. He intends to find out what they eat by pumping their stomachs, where they come from by doing DNA studies on tissue samples, and, as  separate studies, how impacted they are by surfactants in our waters and how many parasites they have on them. Waldron residents tend to be interested in the general natural history of our shores, being less concerned with salmon alone, and more with the larger picture of what we find in our nets.

In past years, we have been working with Kurt Fresh and Eric Beamer, who have followed a specific protocol for doing beach seines. Our team has wondered how to maximize the number of juvenile salmon caught at one time, and we seem to have found a good way to do it. Certainly, our first seining this year netted us thousands of them, as opposed to the tens that we got in previous years. The main differences were time of day and net handling.

The question is, is using a different protocol "scientific?" Must we keep using the previous, adequate protocol, because it is the same as other researchers have been using? Or can we use this new, much more effective protocol, knowing that our techniques are no longer compatible with others?

We decided to go ahead with the better technique. This is not the only way it could have gone.

Setting the Net at 15:00 in the afternoon: Morning rain easing to afternoon sun, warmish (65º?)

Our net was stored on Waldron over the winter, and brought out for the first time this year on Friday. It was unloaded from the back of a truck straight into the water, where one end of the line was attached to David's boat. He brought the net straight out from the beach to its full length, and then waited for five minutes in order to lull the fish into a false sense of security. While he was waiting, we could see the surface of the water being pockmarked with tiny jumping salmon. Under the dock, a school of at least 100 perch hung under a piling, about 5 or 6" long. 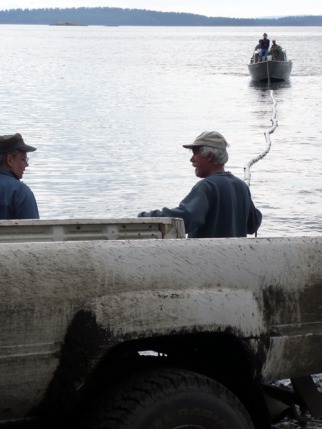 After five minutes, David motored his end of the net over to about 30 meters down the beach, where people untied the rope and began hauling it in. When the ends were even, people began hauling on both ends, trying to keep them even. Now and then, someone flapped the rope onto the water to keep fish from escaping. With two teams pulling with all their weight, the net closed up within about 5 minutes. It soon became clear that there were thousands of fish, most of them salmon. The majority of them were 70 mm long pinks (no parr marks), but about 10% were chum or chinook. 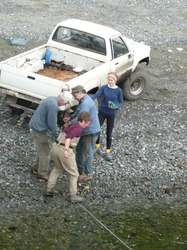 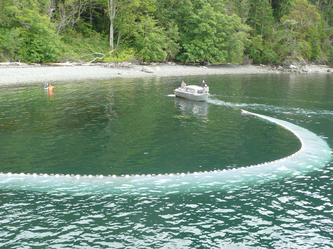 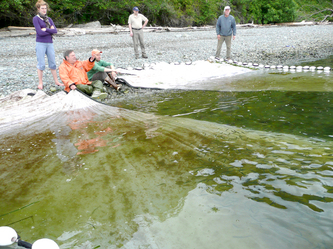 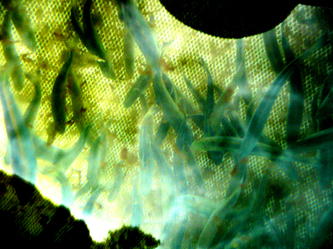 We put a floating net in the water, anchored with a rusty metal blob. Then everyone with a net scooped out fish, counted the pinks, and separated out the chum and chinook into the floating net. This is easier said than done. The pinks were easy to spot, with clear silver-white flanks, but counting them was an art.


Counting moving animals takes practice. The Cornell "Handbook of Bird Biology" recommends that you practice with rice grains first. One technique is to count the number of animals in a block of space, then imagine tiling the whole area with that block and multiplying. I tried this technique with our fish, but they were moving so quickly and with such irregular density patterns, that I gave up. In any case, we wanted an exact count, not an estimate.


As an inexperienced counter, I found I needed to scoop my fish out by twos or threes and count that way. Russel seemed to be able to count groups of twenty or so. Other counters did whatever they did. Mark stood there with a notebook, and we'd yell out to him, "281," "65," "190," and so on. It did not seem to be desirable to keep a count of much higher than 200 before calling out the number and starting from scratch. Also, nobody claimed to be able to keep more than one count going in their head at a time, though I've seen one field scientist who could keep three going.


After about 7,000 fish were counted by hand, the remainder were let through small openings in the net. We noticed that the chinook tended to hide underneath the pinks and chum, so that the final 3,500 fish  probably had a higher proportion of chinook  than the ones we counted by hand.


Many of the other fish in the net were simply carried around in delight and released, without being counted. Thus it is that neither cabazon nor sculpin are listed in the fish count below, even though I  SAW them. I really did. 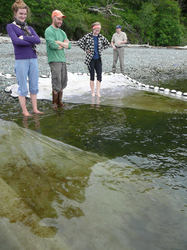 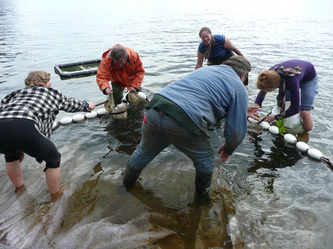 Kelp Greenling: 2
Herring: 2+  Glen R. took tissue samples for DNA analysis.
Perch: Striped: 59
Perch: Shiner: 4
Perch: unidentified: 12
Pipefish: 1
Rockfish: 43   ... some of these were field-identified as quillbacks but may have been Copper Rockfish instead. Glen R says "The Coppers have dark band streaks emanating down from their eyes. that is a Copper in that great pic of the one you took falling in the water. Notice the rays. I looked this up in the little handbook 'Whelks to Whales' when I was trying to identify species."
Salmon in pen (either chinook or chum): 100 At least 50 of these were chinook, which was the number we lavaged; sized 66 - 106 mm.
Salmon: Pinks: 10,500 About 7,000 of these were hand-counted. The remainder were let through small openings in the net and counted that way. 3+ cohos.
Smelt: 4
Snake Prickleback: 7

Coonstripe Shrimp: 3+
Eggs: A mass of orange eggs. These were field-identified as herring eggs, orange instead of white because they had been cooked in the shallow water. There are some questions about that - do herring spawn here? Do herring spawn this late in these waters? Why weren't these eggs eaten already?


Also, please note Glen's notes from the same seining, which are more complete. I am including a link here instead of trying to get our two sets of notes to match for a VERY GOOD REASON! In field work, unless there is somebody specifically designated to take notes, and everybody actually tells that person what has been discovered, then data will be lost. I think it is important to notice this and come up with a protocol which will ensure that we don't assume that everything that needs to happen will actually happen. 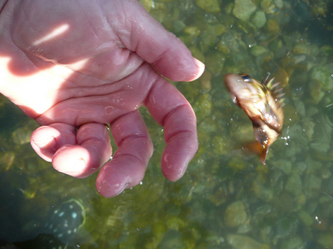 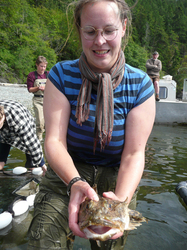 The chinook and chum were in insulated, aerated tubs. We have experimented with different ways of keeping these little guys alive, and this one works very well. It was getting late, so rather than training new people in the technique, which is one of the goals of the community science strand of beach seining, we just set up an assembly line and had at it.

Anne caught the fish and decided whether they were chum (narrow parr marks, big eyes) or chinook (longer, thicker parr marks). Please go here to see drawings. She looked for parasites on the fish, and frequently found up to four of the icky things. One by one, the fish went into a bath spiked with MS222, a fish anesthetic. When they were thoroughly woozy, Anne measured their length and Russel cut tissue from the caudal (tail) fin for DNA and toxin analysis. In previous years, these samples were kept in alcohol, but now they are frozen in dry ice so that more tests can be run. It takes the fish about three weeks to grow the fin back, so there is no long-term damage. Also, since this is not the usual place to take tissue samples from, if the fish is re-caught in the next 3 weeks, it will be possible to tell that it is "ours."

Russel and David labeled vials with one of 50 fish numbers. Each tissue sample gets the same number as the gut sample, so some care was taken to make sure that everything went in the proper place.

Next, I inserted a tube syringe into the fish's mouth and shot filtered water into its stomach, making it vomit up its lunch into a tray, where the gut sample tube was already waiting. These fish had eaten either a collection of tiny larval shrimp/crustaceans, or what seemed to be sand lance. We didn't see any insects, which was not surprising since it is not insect season yet. As soon as the stomach was emptied, the fish went into a recovery bath of aerated seawater. Recovery was swift.

Glen made sure that filtered seawater was available and returned fish to the water as soon as they had recovered.

Madrona and Erin took the trays with gut contents and, using a small paintbrush, collected the goo, stuffed it into the small gut sample tube, filled it with alcohol, and put a lid on.

Later, our community Plankton Counting team will figure out what exactly was in those gut samples. Good luck to them!

52 fish later, we packed up and went home. 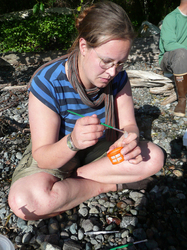 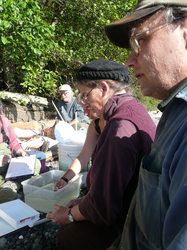