In the morning, 15 people gathered at the dock to learn more about the geology of Pt. Disney.

Imagine that geologic time has been divided into the present, the last 10,000 years or so, and the geologic past. In the present, sand is laid down or washed off of beaches, quarrymen blast rocks off the Point, and so on. In the historic past, geological features such as the sand cliffs at TNC, or geological events such as the island rebounding after the weight of the glacier has melted or the eruption of Mt. St. Helens occur. And then there's the distant past, whose heritage lives on in our rocks.

What can we deduce about that past from looking at features on our shores?

In transcribing my notes, I went to an online glossary. If you click on an image, it should enlarge. 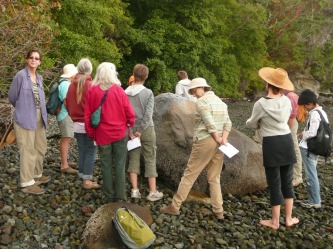 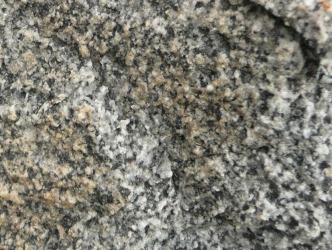 Walking from the dock towards Disney at low tide, the intertidal zone was covered with slimy cobbles. These rocks were probably left by a glacier, and are not very local. If all of us had gathered into a group hug, we would have occupied about as much space as the large metamorphic rock we examined.

Rocks can be divided into "float," brought from somewhere else, or "in situ," coming from local formations. This one is probably float, since it doesn't resemble anything we could see nearby. It has large diorite crystals. The faster a rock cooled, the smaller its crystals are, so we deduce that this one cooled slowly.

The crystals in the rock seem to have a "flow," the crystals have a preferred orientation.  That suggests that this boulder is metamorphic. It started as an igneous rock, then was subjected to pressures kilometers deep that squeezed it, heated it, and made it flow. Larger chunks in the rock are from "wall rock" that fell in from the wall of the magma chamber. The rays that cross it must be younger, since they ignore the flow pattern. They have a characteristic green mineral, chlorite (Mg, Fe, Al, Silicate), down the center. 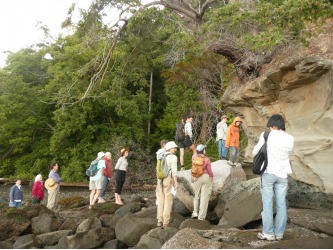 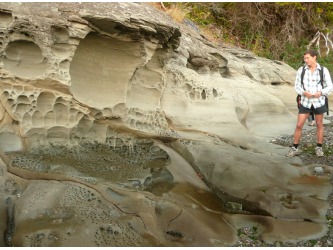 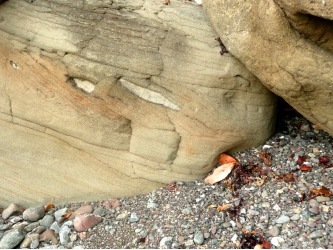 The sandstone outcrop past the large alder has terraces which show old sea levels. The honeycomb weathering is called "boxwork," and suggests that it was underwater at one time. Either sea level was higher, or the rock was uplifted. Seawater is slightly acidic and eats into rocks containing quartz; an erosion caused by dissolving instead of abrading.

Rather than showing flow, the sandstone has horizontal layering. You can see cross-bedding (photo to the right), where the even horizontal layers are interrupted by what look like ripples. They probably were ripples. When you walk along a rippled beach, you can see that the steeper part of sand ripples form where the current comes from, and then the sand plumes off in the direction of current flow. Because the ripples we observed in the rock were steep towards the dock and more gentle in the direction of Disney, we deduce that current flowed in that direction, and that it wasn't tidal currents because they would have flowed in both directions. Also because of the ripple shapes, we know that the sandstone is properly oriented in space. "Up" is more recent, "down" is older rock.

Lick the rock and look at it through a field lens. You can see that the sand granules in each level have a characteristic size. Finer sand was laid down when the area was deeper under water, coarser sand or pebbles when it was more shallow. The grains are relatively angular, so they didn't roll around very much and hence probably didn't come from a long way off.

You can also see several different colors of crystals. The black crystals are called chert, SiO2, and are probably biogeological. Fairly recently in geological time, about 100 million years ago, some radiolaria and diatoms learned to use silicon to form their tests (shells). They live in the photic zone of the ocean, where light penetrates, is about 120 meters deep. This is an example of biologic processes influencing geology. Nowadays, oceanic silicon tends to be tied up in phytoplankton tests so abiological processes no longer precipitate silicon.

Another feature of this sandstone is the prominent mustard-colored cracks which criss-cross it. They appeared before the honeycomb erosion because the erosion avoids them. Some event in the last 19 million years encouraged crack formation, and they turned yellow with oxidation (rust). The layers seem to go across the cracks without distortion, so it was probably not the kind of earthquake that shifts rocks. Perhaps, once a small crack formed, the huge torquing that happens around here enlarged it.

Carbonate concretions and whitish lenses (see photo above right) can be embedded in the rock. Concretions (see photo below right) often form around a seed such as a rock or a fossil. On Hornby Island, people have found fossils inside concretions. 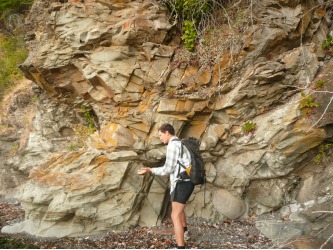 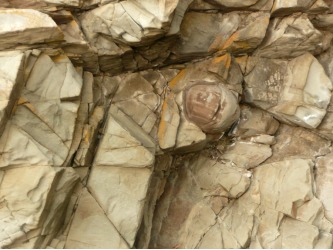 Further towards Disney was a formation which had cracks and crushed areas running through it. The brittleness of sandstone makes reading past events easier than it would be with more ductile rocks. Cleavage lines can be mapped using dip (how far off horizontal) and strike (the compass bearing). They reflect energetic events in the area's geology, such as thrusts from Presidents' Channel and synclines like the one(s) on Disney. 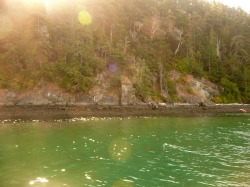 I was in the boat for the examination of a shale/coal formation. I'll publish your notes here if you send me them.


Briefly, the shale breaks up easily, showing that there's plenty of organic matter in it. In a delta environment, with a steep gradient towards the river or shore, organic matter gets laid down very quickly. Some of it is in the process of turning into coal. That's the blueish shale along Disney's top and bottom.


The redder, rock layer in between has less organic matter. The cementing carbonate layer is terrestrial, formed at a time when the climate was hotter, there was a higher rate of chemical erosion, and the chemistry was more acidic.

East Side of Disney

Results of an 1890's survey of this area were archived in Washington, D.C. A friend of Richard E. found them and is planning to publish some day. He might visit our island. One photo showed Disney before quarrying. The big difference was that the headland was far more vertical. A boulder in the cliffs at the top looks very much like the big boulder at the tip of Pt. Disney's foot today.