Josie S: Disney Pt: From above the cliffs of Mt. Disney that overlooks Presidents Channel, Tony first heard, then saw a minke whale. He said it was, at most, about 300 yards from the coastline, traveling slowly north. He saw it surface four times. On Jim L's beach, a sea slug on a rock wall. From E. Kozloff's description of dorid types of sea slugs, "...does not have true cerata" but "dorsal tubercules and other fleshy processes," it could have been a dorid type.

Laurie G: North Bay: Fish (juvenile salmon) feeding in front of our beach at the Otto Pfister boat wreck. 60 waterbirds in front of C**y’s and G**r’s. Juvenile salmon feeding at water’s edge to 25 feet offshore from our swing to Swamp outlet beyond volleyball court, halfway from R**ch’s to H**s’s. (Note:  Bruce Brown's Salmon seine on April 20 confirmed the presence of juvenile chum salmon at Severson Bay. North Beach wasn’t seined.) Otter entered water from land at 1. our house and 2. volleyball court. Later, otters came to wave’s edge and made loud cat-like sounds, seemed like conflict. Our pregnant cat on shore ran to the sound. Otters dispersed in opposite directions. One otter exited water at our swing.

Isa D: A bald eagle with an injured wing walked from the school to Baatz Field, where it died.

Isa D: A red-tailed hawk with a snake in its beak circled the school. It transfered the snake to its talon and flew away. No Aztecs were sighted.

Julie L: Violet-green and cliff swallows at Hammond, as well as otters, eagles, gulls, crows. Unidentified seabirds, too. In the wrack, saw a few small jellies, not the moon jellies I’ve seen in past years. Like the moon jelly, these have a translucent whitish body but instead of white, they have orange-yellow interior features. On the 22nd, saw a live one floating at Cowlitz.

David L: The minke whale is back. For a few days, have been noticing yellowish strings of small particles on the water’s surface at the dock. They might be maple pollen, since the maple trees are blooming at the water’s edge now. 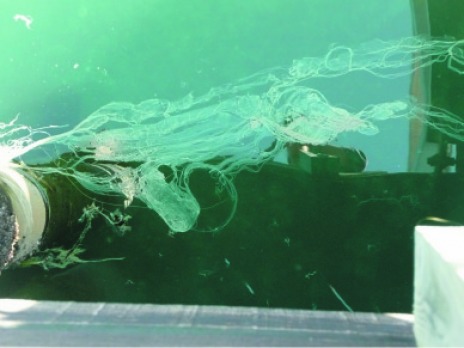 Gretchen W: Pondering the incredible number of chum salmon in the recent catch in Mail Bay.  We have seen a very prounounced increase in seals hanging out in Mail Bay over the last two months (10 or more at a time versus almost none for the last 5 or more years).  Would seals be feeding on chum fingerlings this time of year?  Or maybe feeding on something that feeds on the baby chum?

Jannik von R: Saw a flock of seven Yellow-crowned Sparrows, could be on their way to Alaska.

Julie L: Kayaked from Fishery to Hammond, noon - 15:00, sunny, very low tide. A 1 foot wide ribbon of 3 cm fish in the shallows from R**ck’s to the Point, as well as zillions of little plankton. 2 cm euphausids (krill) lay in the wrack on the beach, and one sponge or egg mass similar to the one pictured for March 17. Deeper in the water,  at around 3m depth, we found a jellyfish bloom, with 1 - 2 mm bubbles floating by, trailing teeny little tentacles. Some sea birds in pairs or singly, about 50 gulls, 20 crows, 2 eagles, 1 otter with a crab in its mouth. Going back, we came upon a mature Bald Eagle standing on the clay point, soaking wet. It flew heavily a short distance away as Java ran at it (we called her back in the nick).

In R**eck’s alder grove, Camilla found her first robin’s egg of the season.

In bloom at our place: Pink-flowering Currant, apples, tulips, elderberry, maple, dandelions. Plum and daffodil blossoms just about done with. 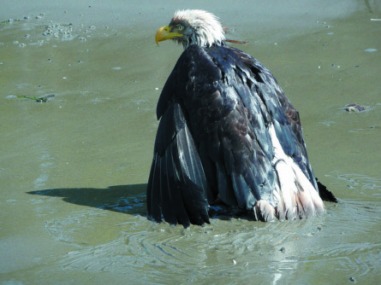